This site uses cookies to store information on your computer. By using this site, you consent to the placement and use of these cookies. Read our Privacy Policy to learn more. ACCEPT
Home » Shows » Black History Month

Join us for a special Mass of Thanksgiving in honor of Black History Month on February 20th. 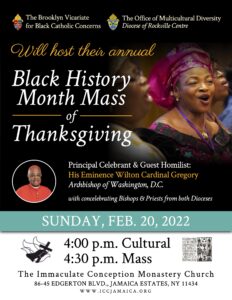 After a successful baseball career in college and as a coach in the military, Jackie Robinson (playing himself) attracts the attention of […]

The Sheen Center Presents – Jackie Robinson : The Faith Behind the Legend

“The Schiller Institute performs “Strength to Love: A Unity Concert,” a collection of African-American spirituals and pieces at the Co-Cathedral of St. […]

Enduring Faith is an ninety-minute documentary that examines the struggle to establish an African American clergy in the American Catholic Church. The […]