By Emily Drooby and The Tablet Staff

WINDSOR TERRACE — A deacon at St. Sebastian Church in Woodside, Queens was arrested on Jan. 20 as part of a police sting operation on allegations that he attempted to have sex with a minor.

The Diocese of Brooklyn became aware that Rogelio Vega, 50, was arrested on Jan. 22 and immediately suspended the deacon. The parish administrator, Father Patrick West, addressed the parish at Mass this weekend by reading a letter from Bishop Nicholas DiMarzio.

“In keeping with our Diocesan Policy and the 2002 Bishops Charter and Norms for the Protection of Children and Youth, [Vega] has been immediately removed from all diaconal ministry,” Bishop DiMarzio wrote.

In a statement, the Diocese of Brooklyn said, “We are horrified by the arrest and charges against Rogelio Vega.”

“The Diocese of Brooklyn is committed to a Zero Tolerance Policy, as nothing is more important than the protection of children,” the statement continued.

Father Henry Torres of St. Sebastian Church said they’re doing everything possible to help their parishioners through this.

He told Currents News, “We are feeling devastated, the parishioners are confused and also sad at the same time, but we are offering all the support we can offer. They can come speak to us, vent, they need to know we are doing all we can to support our children.”

The Queens District Attorney said Vega started communicating with a 14-year-old boy last July on a dating app. What Vega didn’t know was the “teen” was an undercover agent. The prosecutor said Vega exchanged pornographic pictures with the minor, and then planned to meet in person. When Vega showed up, the undercover agent was there to arrest him.

Vega was ordained a deacon on May 28, 2011. He had been a deacon at St. Sebastian since December, 2015. Previously, he was assigned to Most Holy Trinity-St. Mary, Williamsburg. The diocese said that prior to his arrest last Wednesday, there had never been any previous complaints against him.

If convicted, Vega faces up to seven years behind bars. He was released on a $50,000 bond, and his next appearance is set for Jan. 25.

The Diocese of Brooklyn has several protocols and systems in place to combat sexual abuse within the church and to protect victims, including a no-tolerance policy.

Bishop DiMarzio said the Office of Victim Assistance will be making virtual and telephone meetings available to different groups within the St. Sebastian parish to address concerns and offer pastoral care.

“Often, just having a place to speak about such matters are the beginning steps to addressing the strong impact such news can have,” he wrote. “Once again, I encourage each of us in our resolve to protect our children and youth from all forms of abuse.”

In 2004, Bishop DiMarzio established a telephone hotline for anyone to report allegations of sexual abuse by a member of the clergy. The diocese’s confidential reporting line connects directly to law enforcement authorities. Victims are encouraged to report a crime no matter when the alleged abuse occurred. The number is 888-634-4499.

Click here to read the full letter from Bishop DiMarzio. 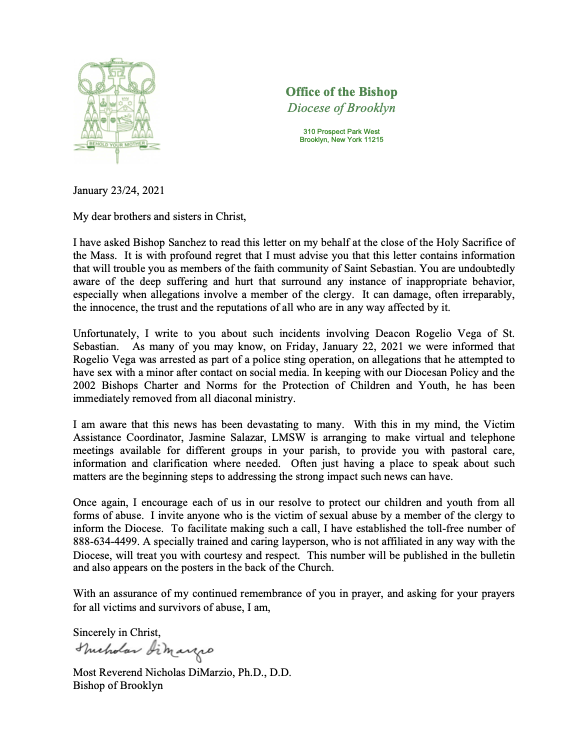