This site uses cookies to store information on your computer. By using this site, you consent to the placement and use of these cookies. Read our Privacy Policy to learn more. ACCEPT
Home » Currents » CCBQ Mobilizes to Help Migrants Bused In By Texas Governor
Tags: Currents Brooklyn, NY, Faith, Queens, NY

BROOKLYN HEIGHTS — When the staff at Catholic Charities of Brooklyn and Queens came to work one recent morning, they found asylum seekers from South America sleeping on the sidewalk outside their downtown Brooklyn offices.

Msgr. Alfred LoPinto, CEO of CCBQ, said he remembers how these migrants from Venezuela and Colombia, many with children, arrived by the busloads from Texas after having crossed the U.S.-Mexico border. 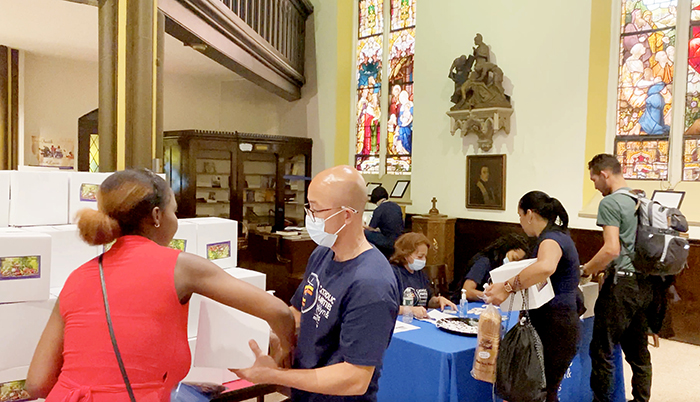 The team at Catholic Charities of Brooklyn and Queens served an estimated 200 asylum seekers from Colombia and Venezuela on Monday, Aug. 29, during an information session at St. Charles Borromeo Church in Brooklyn Heights. The migrants also received food boxes (photo below), bags of toiletries, and a hot lunch. (Photos by Bill Miller)

“They came with letters telling them that, from now on, their new residence was 191 Joralemon Street,” Msgr. LoPinto said. “We had them camping out in front of the building. We were just blindsided by the whole thing.”

Still, CCBQ mobilized, first by providing boxes of food and bags of toiletries. They also hosted information sessions conducted by staff and volunteers who spoke fluent Spanish. Two such sessions were held for about 200 people on Aug. 29 at nearby St. Charles Borromeo Church in Brooklyn Heights. 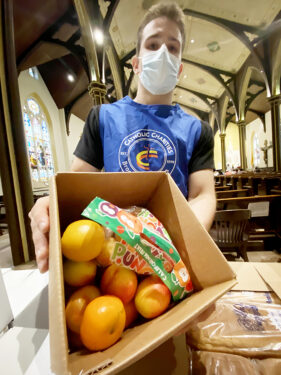 Msgr. LoPinto greeted the attendees in the vestibule and directed them to the information sessions in the front pews. CCBQ also served them a hot meal of chicken, beans, and rice.

During a break, the CEO recounted how federal immigration officials in Texas apparently told the people to find specific addresses for Catholic Charities in New York City.

An estimated 9,000 migrants recently came by bus from Texas to Washington D.C. and New York City. Texas Gov. Greg Abbott, arguing his state was stretched to the limits with the influx of migrants at its borders, directed that they be sent to so-called “sanctuary cities,” like New York City.

However, Msgr. LoPinto said, Catholic Charities officials in the Archdiocese of New York and the Diocese of Brooklyn had no “heads up” that would have allowed them to get ready for the sudden mass arrivals of migrants.

“Who was expecting buses from Texas to drop people off in Times Square? But that’s what they were doing,” he said. “The sad part of it is, had they given notice ahead of time, we could have been more organized and had a much better opportunity to help. But now you just kind of roll with the punches.”

He pledged that CCBQ will continue efforts to help as long as there is money to do so.

“We weren’t prepared financially to take on this responsibility,” Msgr. LoPinto said. “Thank God the St. Vincent de Paul Society has been helping us put together an emergency fund for this effort. With some matching money and some donations from people, we’re at about $300,000.”

Msgr. LoPinto praised the staff, volunteers, and Father Bill Smith, pastor of St. Charles Borromeo, for their prompt response to quickly organize and get services rolling to the people.

“It would be impossible to do this without the parish volunteers,” Msgr. LoPinto said. 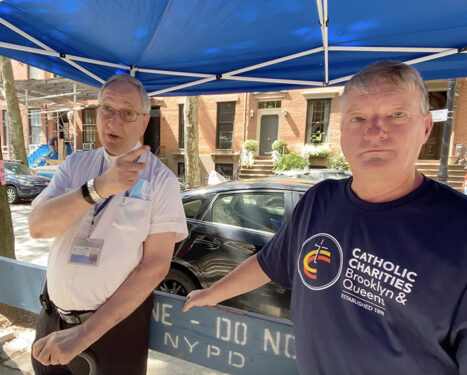 Richard Slizeski, Catholic Charities’ vice president for mission, said the team at the church is conducting information sessions that are especially welcoming.

“This was a nice addition here at St. Charles because it offers some fellowship,” Slizeski said. “To have this lunch, to serve them, gives a whole different feel to it.

“It has been a 30-plus hour bus ride up from Texas. They’re hungry. They’re confused, disoriented. It’s all terrible.”

Not to mention, added Msgr. LoPinto, the perilous journey the migrants took through South America, Central America, and Mexico.

At the St. Charles Borromeo information session, Alvanys Rondon, a woman from Venezuela, confirmed that the trek through the jungles of Panama was very harsh.

John Gonzalez, CCBQ director of parish and community relations, translated for Rondon, who said the jungle was a rough slog for her 10-year-old daughter. The family had to wade through foliage that tangled their legs and a near-constant quagmire of mud.

The family paused in Mexico for about a month because they had depleted their travel money, Rondon said. There, her husband worked a job long enough for them to get money to continue north.

But every step of the way, she said, the Catholic Church helped her family endure. She expressed deep gratitude for the help they’re now receiving from CCBQ.

“The word she used is bendecida,” Gonzalez said, “which means, ‘blessed.’ ” 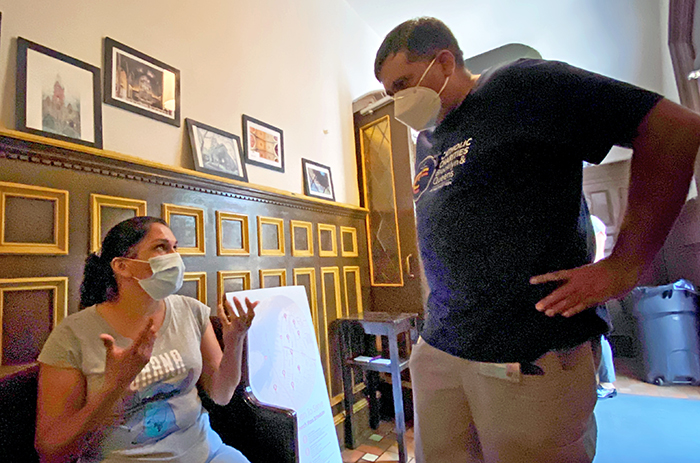 John Gonzalez, CCBQ director of parish and community relations, translates for Alvanys Rondon of Venezuela, who describes how her family reached the U.S. for asylum, despite extreme hardships like slogging through dense foliage and mud in the jungles of Panama. (Photo: Bill Miller)