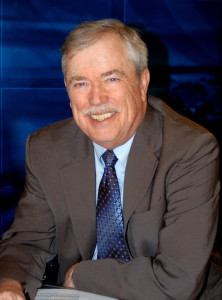 Ed Wilkinson was the Editor of The Tablet, Brooklyn’s diocesan newspaper, from 1985 to 2018, when he assumed the title of Editor Emeritus. He retired from full-time work in 2020 after 50 years of service with The Tablet. He continues to works on special projects for The Tablet and NET-TV.

After joining The Tablet staff in1970, he wrote a weekly sports column for 11 years while also reporting on local news. He became News Editor in 1981 and remained in that position until he was named Editor in 1985.

In the spring of 2019, the Catholic Media Convention honored The Tablet as its Newspaper of the Year, i.e., the nation’s top diocesan newspaper.

He can be seen on Currents, the daily Catholic news show on The NET, when he conducts a Friday interview with Bishop Nicholas DiMarzio, the Bishop of Brooklyn. He also hosts the weekly NET-TV show, On the Block, an interview show that features the priests of the metropolitan area in their home neighborhoods.

The most memorable event of his tenure as Editor was a personal meeting with John Paul II when the Pope visited New York in October, 1995.

He has been honored by the Msgr. Ferris Life Center, the Helpers of God’s Precious Infants, the Catholic-Jewish Relations Committee of Northeast Queens, the Boy Scouts of America, Arriba Juntos Youth Center, the Catholic Teachers Association, the Kings County Ancient Order of Hibernians, and the Cathedral Prep Alumni Association. In 2000, he served as Chief Brehon of Catholic Charities’ Great Irish Fair. In 2007, he was selected to be Grand Marshal of the Bay Ridge St. Patrick’s Day Parade.

In 2014, he received the Bridge to Life Award from the pro-life group of the same name, and he was honored at Brooklyn Borough Hall as the Irishman of the Year at a St. Patrick’s Day breakfast.

In May, 2018, the Diocese of Brooklyn honored him with its St. Francis de Sales Distinguished Communicator Award at its observance of World Communications Day. Ed and his wife, Sheila, and their 24-year-old son, Edward Daniel, live in Our Lady of Angels parish, Bay Ridge.